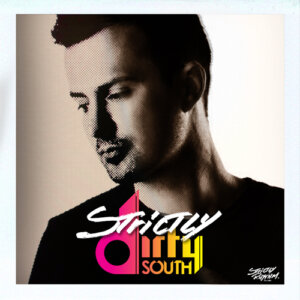 Released June 21 2011 on Strictly Rhythm
Strictly Rhythm is pleased to announce that superstar Producer/Remixer/DJ Dirty South has been chosen to compile and mix the latest installment of its acclaimed compilation series. Following efforts by Masters At Work, Todd Terry, Tiefschwarz, Erick Morillo and Bob Sinclar, Strictly Dirty South marries classics from the Strictly Rhythm catalog with the most up front Dirty South favorites currently on the scene.

CD One is a look back at some of the bigger moments on Strictly Rhythm and in clubland over the years. The mix builds nicely with cuts from Aly-us, KOT, Lil Mo Ying Yang, Shakedown, Bob Sinclar and includes exclusive re-edits of Ultra Nate “Free” fused with Live Element “Be Free” and Falko Richtberg & Sebastian Wojowski’s “Madelaine” is married with Julie McKnight’s “Home.” CD Two is full of current club bangers from the likes of David Tort, D.Ramirez, Thomas Gold, Green Velvet, Danny Freakazoid & Matt Casseli and Tristan Garner as well as plenty of remixes and productions from Dirty South (including his Diddy-Dirty Money “Coming Home” remix.)

Dirty South comments, “Putting together my Strictly Rhythm compilation was fun and a great opportunity to showcase two different sides of my take on house music and the way I DJ at one of my shows. The First Disc is a reflection of my ‘old school’ house music and it features some of the tracks Ii grew up with, while the Second Disc is basically the sound that I currently play at my shows and these are the biggest tracks of today. Both discs were a pleasure to construct and mix and I’m very happy to show people a taste of two different worlds of house music that are separated by 10-15 years. Yes, the sound and the energy has definitely changed, but its all house music at the end of the day!!!”

Strictly Rhythm head of A & R, Seamus Haji adds “Following on from Erick Morillo and Bob Sinclar in the series I wanted Dirty South to mix the comp as I felt he would understand the heritage of Strictly Rhythm which is known for great vocal tracks, club anthems and harder edged tracks. It was this variety that I wanted to be encapsulated in the mix. He produces and plays vocal tracks as well big room stompers so I thought it would be interesting to see how he would marry his style with ours. I think he’s done a fantastic job and you can hear the amount of effort he’s put into the mix in the way that he’s programmed & mixed it and also created lots of exclusive Re-edits for us!”

Strictly Rhythm Records is house music. Since 1989 the legendary New York label not only put out records by almost every name in the game, but it also defined house music throughout the 1990s. In 1994 Strictly notched up its first crossover hit with Real 2 Real’s ‘I Like To Move It’, a feat it was to repeat throughout the rest of the decade with Wink’s ‘Higher State of Consciousness’, Ultra Naté’s ‘Free’ and Wamdue Project’s ‘King of My Castle’. In between the hits the label provided a steady output of club tracks by a huge array of respected artists from Barbara Tucker and Masters At Work to Erick Morillo, Josh Wink, Armand Van Helden, Danny Tenaglia, David Morales and DJ Pierre. Almost every house producer of repute who was active in the 1990s is represented in the catalogue.

Strictly Dirty South is available as a Two-Disc CD, iTunes version and special DJ friendly digital version featuring unmixed WAV files of each individual track and two separate DJ mixes. The DJ friendly version will be available as a bundle only from Beatport and other digital music retailers.