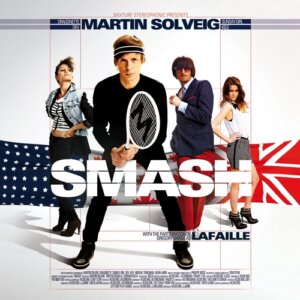 World known DJ / producer Martin Solveig is back as a tennis player. His newest album, SMASH, is out!!

As 2010 was in its final months Hello became his biggest career landmark to date. The genius creation that is the SMASH YouTube series came to define a new breed of music videos, signalling Martin as a creative force much more powerful than most of his contemporaries – regularly described by many critics as being “in a league of his own”.
First came the legendary Roland Garros stadium, then the incredible Stade De France, a rooftop pool in Singapore and upcoming episodes from Japan and Australia. There really is nothing to halt the series from going on to achieving so much more. And this is without touching on the soundtrack that accompanies each episode.

Each video is accompanied by snippets of his latest creation, SMASH. A modern day masterpiece, bursting at the seams with pure fun, frivolity and all capped off with timeless trademark sounds. Involving the undeniable talents of Dragonette, Bloc Party front man Kele, up and coming UK sensation Sunday Girl plus US whirlwind DEV – it brings Martin to new and dizzying heights. The album also includes remixes from Arno Cost, Sidney Samson, Hardwell and Michael Woods!

Are you ready to SMASH?